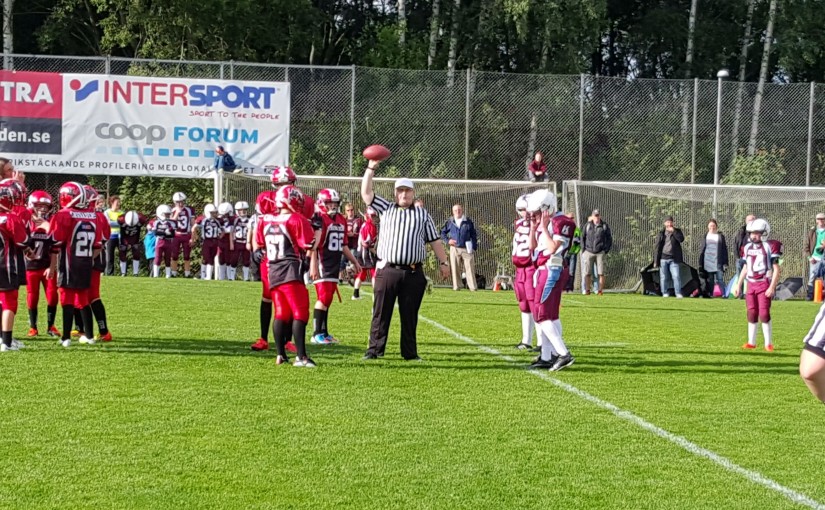 It is time.
Friday. The tournament begins.
For the sixth time the last seven years I stand here, with the feeling that anything and everything can happen.
Is it our turn? Will the Flyers fly this year?

When the games have started, sooner or later the all too familiar question is raised – When is it okay to relax?
Is it at 6-0 and 34 seconds left on the clock? Is it at 14-0 after 4 minutes?
Is it when we have come back from behind and feel the momentum is finally ours?
My previous years here tell me you can never relax.
Not until you see the long awaited and blessed referee sign. 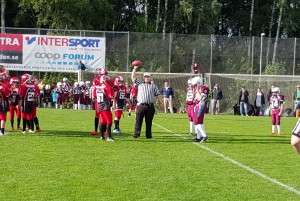 This was truly the case in the last game today, where our heavy-weights in U17 beat Västerås Roedeers with 6-0 after an early defensive touchdown. Västerås had a really agile quarterback that constantly caused our defence trouble, and unhealthily often got us on the side to hold our breaths.
But our defence held tight. And our offence pounded forward enough to make the distance long enough when the Roedeers got or took the ball back.

When most people around the arenas had retired to hotels, dorms and guesthouses our U17 gave us exactly the feeling that we want after the first day. Flyers U17 took a demoralizing loss against Stockholm Mean Machines in the opening game. Despite their loss, they gathered to send all remaining energy to U15 and U13 that were just about to enter the tournament. 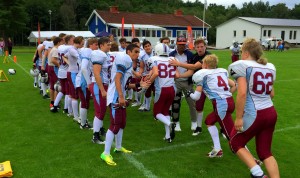 Täby Flyers U17 went to the locker room.
They shook off all bad from the first game.
They bit the bullet.
And they rose again.

Meanwhile, U15 and U13 had comfortably won their opening games.

Täby Flyers U17 were determined to fly too.

I was not sure how our U15 would hold up against the rest of Sweden, after a very short preseason.
I was worried how U13 would hold up, after their total dominance last year, and then the loss of all 2001 players that had ascended to U15.
I had absolutely no idea about our U17.

The first game for U17 gave us hope, when they moved the ball and crunched yards. But they let Stockholm move a bit too easy as well. They were ahead, they fell behind, they struggled back, but not all the way. And when that momentum felt just right, SMM scored another touchdown.

You look for signs.
From the wildest superstition – the sun appeared, so the pass will reach it’s recipient, just like it did a few moments ago, when the sun shone on us between two clouds.
To sharp analyses – the quickness in the feet of our runningback is definitely better after halftime, and their DB looks a bit more worn.

But this sport is not controlled by either superstition or science. The vital ingredient of a winning team is not achievable through either priests or professors.

I will not try to explore what is required to find that combination of teamwork and individual expertise, countless sports psychologists and experienced coaches have done that enough, and I am no more than a slightly biased spectator.

But sometimes you can see it. You can sense it. The atmosphere on the sideline. The energy on the field. There and then, when the team becomes completely invincible. There and then, dammit, I get invincible too, standing there wearing my Flyers t-shirt feeling the pulse go up.

A pass is blocked. A sweep is read. The clock is ticking. Fourth and long. Time runs out. The referee puts his right arm in the air, holding the ball. We did it.

After the victory for Täby Flyers U17 tonight, hardly any cheering was heard from the team.
They had fought for almost an entire game to stay ahead, to protect our nest. They had done their job. Now, they wanted to go home to dinner, to breathe, to sleep well with a victory in the bag. To recharge.

They did their job and gave us on the side that feeling. That feeling saying that anything and everything is possible.
I guess it is that feeling that makes me come back, year after year.

Täby Flyers U15 delivered in an almost spotless way today. 28-0 against Kristianstad Predators.
Täby Flyers U13 delivered at least as good, 46-0 against Carlstad Crusaders, where almost half of the points were scored by our defence. A very strong effort.
One loss, three wins. 94-22 total points.

Will the Flyers fly this year?