I believe everything has already been said about this club, big words bordering cult like worship on how good we think (I mean realize, entirely objectively, of course) that we are.
So I will refrain from that now, I won’t boost that club, that I guess still towers a bit, distinguishes itself, in our bubble of American football in Sweden.

For Täby Flyers, the final day had games deciding fifth or sixth place for both U13 and U17, and two games to decide places four, five or six for the U15 team.

We struggled out of bed after last night’s dinner for families and supporters to watch the first U15 game that started at 8:00, facing Limhamn Griffins.

But our guys didn’t quite get their game going. All too soon, us adults in the crowd felt like this was not their day, that the players and the team lacked that last percent of focus. Yesterday’s loss of the first place in the group seemed to have made today’s games a bit less interesting, I mean, who cares if you end up on fourth, fifth or sixth place in the tournament…? Doesn’t every place count, we wondered as parents.

The joy of playing seemed to be there, the desire was probably present too. But the sharpness in the execution wasn’t entirely there. The coaching staff had a notably more relaxed attitude. The guys were having fun. The coaches were having fun. In the crowd, we eventually reluctantly allowed ourselves to be infected by their joy, after a rare successfull play. But we lost. 12-0 for the wrong team. That is hardly any fun.

What is a game to decide 4-5-6 place anyway?
A showdown of dissappointments, a Clash of the Not-Good-Enough?
Two teams that are both First of the Loosers fight with bitterness and anguish for the least embarrassing place?
Or simply an opportunity to do the best thing we know with the best guys we know?

That is what everything is all about – how you handle it. Winners instinct is absolutely crucial to become a top athlete and to stand a chance among the best of the best. But you must also have the ability to take things for what they are and see the perspectives. As a spectator I was first slightly annoyed by the attitude on the field and on the sideline – how can they take this so lightly? How could the coach tell the players at halftime that ”defence played fantastic”, when I saw the imminent threats whenever the opponents got going on the outside? Well, I got both angry and suspicious about the leadership by the coaches. And actually quite surprised. Is this how our competent coaching staff leads our players after first set-back?

Angry – sure, that is okay. During games I usually have the decency of shutting up and keeping my personal coaching tips to myself. I just mutter a bit, clech my fist in my pocket. Start thinking about how to spell it out during my chronicle writing next night…

But suspicious – I had no reason to be. They do know what they are doing. And now when this 43-year-old spectator has gotten some perspective to the day, I too realize that the coaching staff for Flyers U15 – with an average age of 19.6 years – know exactly what they are doing.

What could the two games today be used for?
If we, of course, disregard completely irrelevant things like the place in the tournament.

Life is 10% the predicament you are in, and 90% how you handle that

Sure, they didn’t win the group and they didn’t play for gold anymore. That was their predicament. But they handled that to use the game to play football, to play for each other, to play for the coaches, and to have a bl**dy great time.

We in the audience obviously have a lot to learn from the guys on the field. I have no reason to question the honesty when one of the captains after the game this morning said he had never before had this much fun on the field. A 12 to nothing loss, playing for spot 4-5-6 in a tournament where they had had the unspoken common goal of getting the gold medals.
The most fun ever, on the field.

For most of us, who have been drilled into a world characterized by competition, where winning is everything, it is a wonderful trip back to Never Never Land to experience this exuberant joy of being right in the middle of the journey, and for a moment not give a rat’s ass about the expectations from the rest of the world on what their so called goal is.

While our U15 enjoyed their way through the early morning game, our younger guys took on the only home team of the tournament – Skövde Dukes U13. It may be considered rude to the hosts, but it was a very nice, very comfortable, very safe and very happy win for our Flyers with final score 44-8.

Then it was time for U17 to take on the old Stockholm rival Arlanda Jets. We got an early lead by 6-0. But anyone who knows anything about football knows that a 6-0 lead is even more fragile than a 1-0 lead in soccer. And the game is long, and the Jets are a heavy team to face. But then, the delivering second touchdown. 12-0. And they held their ground for the remainder of the game.
Two of our teams had managed to utilize their chances today, done what they should and won.

U15 entered the second game of the day, they too against Arlanda, with the conditions that victory or a tie would give Flyers the fifth place in the tournament, loss would mean Last of the First of the Loosers, a sixth place. If that should matter to anyone.
The game developed a lot like the first one. But got a different ending on the score board.

I passed the chairman of our club, rethorically asking him ”When is it okay to relax?”. Chairman Kjell had done his homework and read the blog.
”Never.”

The kickoff was returned all the way. 20-14.
Flyers threw an interception.
Jets passed their way forward.
All the way, again. 20-20.
PAT… and we stopped it!!!

After the following kickoff there was a short break. The referee went to find another official. ”What happens if it ends a tie – overtime, sudden death, penalty kicks, can it end a tie?” I actually had to help them out myself, informing them that it was some kind of group playoff, so the game is allowed to end a tie.

But finishing the tournament with a tie against Arlanda, well despite all my talk about the ”joy” of playing and the ”journey”, that would be a huge anticlimax. 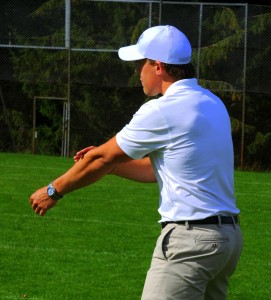 So, since HC Brinken seems to have a problem with his arm after rubbing it all weekend, we gave him some anti-itch (antikli in Swedish ;).

And then we had Max, what could we do with him? Send him in on a mission impossible – with only a second or four left on the clock run on the narrow side of the field, which was filled with orange Jets-players. 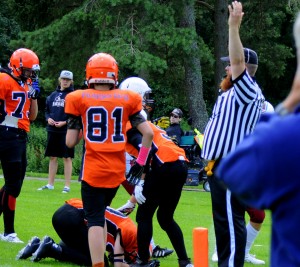 And Max did what he usually does in his best moments – he couldn’t care less about other players, whether they wore Jets-orange, Flyers-white or even the zebra-striped ones. He kept running and pounding and running into and over everyone in his way until the game was over and he had landed like a 15-year-old roaring diesel locomotive in the endzone.

After this exit from the tournament by Flyers, everyone in the audience that since many years had forgotten about Tinker Bell and the Lost Boys could feel that bubbling joy once again.

After all, we do want those victories. We are not in there on the field, we are not standing in our football gear on the sideline hugging our teammates, we don’t get that pure honest immediate joy that the adrenaline under the helmet can give you.

Three fifth places for our teams.
I will not involve myself in athletic and result based goals, but it sure has a sort of poetic ring to it – 555.
Come to think of it, the Arabic figure 5 is written in Roman figures as V, and the V-sign is of course internationally known to mean Victory. So I guess we won the whole thing then, right?

If you ask our spiritual advisor Peter Pan, I am sure he will agree without the slightest hesitation.

And by the way, it is far far better than three sixth places – 666.

Thank you, all you fantastic Flyers, for the entertainment.

Footnotes:
* The rubbing of Brinken’s arm has nothing to do with afflictions of any kind, he is probably at full health, physically. The arm-rubbing is one of the signs to the players on the field instructing them what to do in the next play. Don’t ask me what it means.
* Max’s reluctance to care whether opponents happen to be in his way is accurately described in the text though.
* After a long weekend with very late nights at the computer I am entitled to one bad pun, which is stated in fine prints in some document.